Area of a circle

We are going to review identification of angles.

Identify Points and Lines in Geometry

Classify a Triangle by the angles

Today we are going to be learning how to find a side or the hypotenuse of a right triangle by using the Pythagorean Theorem.

The Pythagorean Theorem was one of the earliest theorems known to ancient civilizations. This famous theorem is named for the Greek mathematician and philosopher, Pythagoras. Pythagoras founded the Pythagorean School of Mathematics in Cortona, a Greek seaport in Southern Italy. He is credited with many contributions to mathematics although some of them may have actually been the work of his students.


The Pythagorean Theorem is Pythagoras' most famous mathematical contribution. According to legend, Pythagoras was so happy when he discovered the theorem that he offered a sacrifice of oxen. 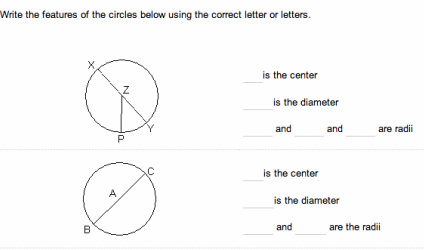 What is the sum of angles in various shapes?

The side of a cube measures 3. What will be the volume and surface area of the cube?

The length of a cuboid is 4, width is 5 and height is 12. What is its volume and surafce area?

The surface area of a cuboid is 112.Its length is 4 and height is 8. Find its breadth.

Radius of a sphere is 8. What is its volume?

Radius of a sphere is 2. What is its volume and surface area?

It costs 1 unit paint to paint 1 box of a rubix cube. How much paint would it cost to paint all the boxes of the rubix cube?

Today we are going to be learning more about angles.

Two angles are complementary if the sum of their angles equals 90 degrees.
If one angle is known, its complementary angle can be found by subtracting the measure of its angle from 90 degrees.

There are seven types of triangle, listed below. Note that a given triangle can be more than one type at the same time. For example, a scalene triangle (no sides the same length) can have one interior angle 90°, making it also a right triangle. This would be called a "right scalene triangle".

We are going to learn about basic geometric figures and their relationships among points, segments, and lines.
There are some basic geometric concepts to know. Please write the following terms in your geometry journal.

Area and Perimeter of Triangles

Today we are going to learn about finding the area and the perimeter of triangles.